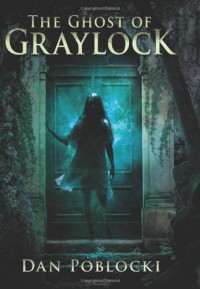 Neil and his sister Bree are new in town. Since their father left, their mother has been slowly falling apart. She decided she "needed some time" so she sent the kids to stay with her sisters. Neil is looking for something to think about besides his mother maybe being crazy. So, when he hears the stories about Graylock Hall, a psychiatric hospital that has been closed down for years, he decides to check it out.

After going to Graylock Hall, Neil and Bree start experiencing strange dreams and weird things start happening to them. They are scared and Neil is afraid he might be going crazy. Neil decides the only way to stop the ghost haunting them is to find out the truth of what happened at Graylock Hall.

Good, creepy story. I'm a big fan of scary stories and this one doesn't disappoint. Keep in mind, the audience for this book is around ages 12-15, so it isn't quite as scary as it could be. But there were plenty of times I was on the edge of my seat and worried for the characters. And it isn't easy to figure out who the villain is until it's almost too late.

Anyone who likes ghost stories.