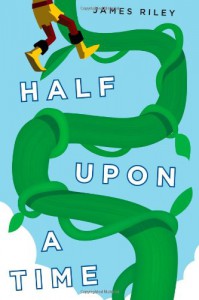 "Life's no fairy tale for Jack. After all, his father's been missing ever since that incident with the beanstalk and the giant, and his grandfather keeps pushing him to get out and find a princess to rescue. Who'd want to rescue a snobby, entitled princess anyway? Especially one who falls out of the sky wearing a shirt that says PUNK PRINCESS and still denies she's royalty. In fact, May doesn't even believe in magic. Yeah, what's that about?"  (from the book jacket)

In the beginning of this story, we find Jack playing the hero in a training exercise. He is supposed to rescue the princess, but Jack does things his own way and it doesn't go so well. Luckily it was only training. On the way home, Jack's grandfather is explaining to him how important it is for him to learn to be a hero and rescue & marry a princess. Jack says something like there aren't any unmarried princesses around here and it's not like one is going to fall out of the sky... When that's exactly what happens. A girl (May), who appears to be a princess (according to her shirt anyway), falls out of the sky right in their path. She seems to be from our "normal" world and she has somehow fallen through a portal of sorts to Jack's world of magic, giants, fairies, etc. In other words, the world of Fairy Tales. A Huntsman is chasing May and her grandmother is missing. And it seems as if, somehow, May is related to Snow White (who has been missing for some time). Jack ends up on an adventure after all, trying to help May and rescue her grandmother.

Okay, first I must admit that I have a thing for these kinds of stories. I've seen quite a few written for younger readers in our school library. For instance, Goldie Socks & the Three Libearians, The Three Little Pigs & the Somewhat Bad Wolf and Three Silly Billies. Not to mention some of my recent favorites for young adults such as the Cinder series and Rump. I love the new twist put on an old story.

The story of Jack, May and Prince Phillip pulled me in right away. The characters are flawed and likable. And the situations range from funny to edge of the seat adventurous. This story brings in characters from many different stories, including Little Red Riding Hood, the Wolf, Snow White, the Evil Queen, the Huntsman and many more.

The book is cleverly written and fast paced. I am quite excited to read the next two, Twice Upon a Time and Once Upon the End. The end of this book left many questions that must be answered...

This would be a great book for kids in grades 4-8 (depending on reading level). I also think it's a great book to read aloud and share with your kids. Any kids who enjoy adventure stories or princess or hero stories should enjoy this book. Quite a few of the 4th & 5th graders at our school are reading this.

Rump: The True Story of Rumpelstiltskin by Liesl  Shurtliff