The Ballad of Songbirds & Snakes - audiobook 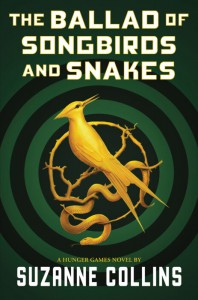 Coriolanus released the fistful of cabbage into the pot of boiling water and swore that one day it would never pass his lips again.

This is a prequel to the Hunger Games series, set during the tenth Hunger Games (Katniss volunteers for the 74th Hunger Games). Coriolanus Snow is a teenager and in school. He and some of his classmates are selected to mentor the 24 tributes. Snow is irritated when he is chosen to mentor the girl from District 12 - Lucy Gray Baird.

Snow's family is poor (a result of the war with the districts) but he doesn't want anyone to know. He sees himself as better than pretty much everyone else, especially people from the districts. His chilly attitude and selfishness make him difficult to like, then again we aren't supposed to like him, are we.