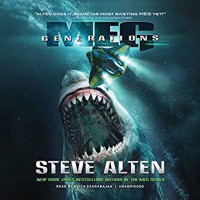 From the moment the early morning fog had begun to lift, they sensed they were being watched.

Not a bad killer beastie story. The Megalodon is scary and the way she escapes from the deep ocean is close enough to believable that we can suspend our disbelief. Mayhem ensues as humans attempt to capture/kill the shark. Oh, and the shark is pregnant, so a built-in sequel, no matter what happens to the main shark.

My main problems with this story are with the main character and with the author's apparent attitude towards women. Jonas is not likable at all. And the way the author describes and talks about women made me think the book was written in the 70's. It's absolutely cringe-worthy. The sexist language and attitude of the male characters are unbelievable. It was hard to listen to at times. Also, the repeated use of the words, "Ampullae of Lorenzini" was irritating as hell. Okay already, we know what they are and how the shark uses them. You don't have to refer to them by name in every other sentence.

Overall, the book wasn't bad, but I recommend seeing the movie instead. They eliminated the character of Jonas' wife completely and the cringe-worthy sexist bullshit was gone. And the women characters were more than just sex objects.

I'm using this book towards by HA A to Z challenge over on Goodreads.