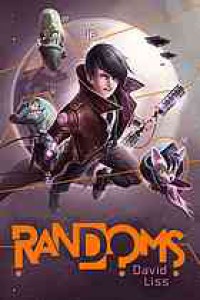 This is a book written for science fiction fans, in more ways than one.

Zeke (the mc) is selected, along with three of Earth's most talented young people, by the Confederation of United Planets to live on their space station for a year. When the Confederation evaluates a species, they always choose four, including one Random. Zeke is Earth's Random.

During the journey to the station, the ship is attacked. Zeke manages to destroy the attacking vessel, saving the lives of every being on their ship. But, instead of being hailed as a hero, Zeke is treated as a war criminal by almost everyone. And he is rejected by his own group, including their chaperone, a representative of the state department. Zeke gets together with the alien Randoms, who were also rejected by their own species, and they form a loyal bond.

This book is filled with science fiction references that will delight fans: Captain Kirk, Star Trek, Star Wars, and Ender's Game to name a few. Zeke is a sci-fi superfan and he enjoys making connections between his current situation and various shows, movies, and books.

This a great book for middle grade. Zeke faces issues of fitting in, making friends, and having feelings for an alien girl. There are also conspiracies, friendship issues, hidden secrets, and politics. For example, some influential people in the confederation are more interested in saving face than in saving lives. There are a few twists I didn't see coming and a big one that I sort of did, but it's all fun.

I enjoyed this one and there are two sequels that I hope to get around to eventually.