It Ain't So Awful Falafel 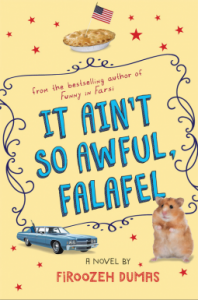 To all the kids who don't belong, for whatever reason.

This one's for you.

My dad says that the dogs and cats in America are luckier than most people in the world.

My dad always says that kindness is our religion and if we treat everybody the way we would like to be treated, the world would be a better place.

... only bookworms get excited over other bookworms

"Who would ever have thought that a person could be so powerful, then so completely powerless, all in the same lifetime?"

- page 219 (referring to the downfall of the shah)

... even though we belong to three different religions. We are alike in so many more ways than we are different.

It was only when I stopped pretending to be someone else that I found my real friends.

This was a good read. Zomorod (who changes her name to Cindy) is from Iran. Her father is an engineer who works with American companies building oil refineries in Iran, so they moved back and forth a couple of times.  Now she is starting junior high (which nowadays is called middle school) and doesn't know anyone. She wants to fit in, but she focuses on how different she is from all the other kids. The first friend she makes (in the summer before school) decides she doesn't want to be friends when school starts. Poor "Cindy" is lost and worried and tired of having to explain to everyone where Iran is and how to pronounce her last name.

Cindy finds friends and seems to be settling in and basically happy. Then Iran has a revolution, the shah is kicked out of the country, and Ayatollah Khomeini takes over. On November 4, 1979, Iranian students, angry that President Carter allowed the shah to come to the United States, take a group of Americans hostage. This changes Cindy's family's life and her father loses his job.

I was in junior high during the Iran Hostage Crisis. I remember feeling vaguely angry at the hostage takers and worried about the hostages. My mom wasn't huge on watching the news with us or anything, but I knew what was happening (at least generally).

It was interesting reading this story told from the point of view of an Iranian girl in America at the time. It was so hard for Cindy's family, and many Americans were so hostile towards Iranians, even though those living in America weren't responsible for the situation and didn't necessarily approve of it. Cindy and her parents were so appalled that a religious leader could be responsible for such behavior. But that didn't save them from hate and discrimination.

This is a nominee for the Florida Sunshine State award grades 3-5. I really liked the book and will highly recommend it to our students when school starts.