The Girl in the Well is Me 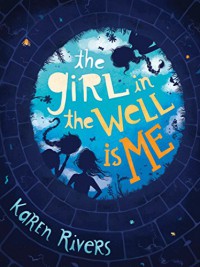 The whole thing feels like a prank at first, like something they planned -- a joke with a punch line.

Lying turns your soul into something small and dry and hard, like an old raisin you find in your book bag squashed under a book you on-purpose-forgot to return to your old school library because you loved it too much to leave it behind.

But, obviously, popular and mean are tied together so tight they're like those knots that just tighten and tighten no matter how hard you try to untangle them. Mean is where they get their power.

Ahh, poor Kammie. She's 11 years old, in sixth grade, just moved to a new school, and all she wants is to fit in. She decides she wants to be friends with the mean girls, she will be mean girl #4. Oh, and the mean girls are Mandy, Kandy, & Sandy. Seriously?? Kammie says they are like one person, interchangeable and three times meaner when they are together. They move through the school like sharks, and the other kids move aside for them.

Kammie moved because her dad embezzled money and they lost their house. She thinks everyone in her family is a liar, but she resolves not to be one. Then she goes and changes who she is to fit in with the mean girls, so go figure.

The girls convince Kammie to let them cut her hair off, and then ask her to stand in a deserted field and sing a song. Well, that's a bad idea. Turns out Kammie is standing on a cover of an old well.

She falls in, and then... guess what? The three ...andys have no idea what to do. And act like Kammie should just stop playing games and get out.

We see the whole situation through Kammie's eyes (and through her distorted view of the world).

This is a great book. It is suspenseful and moving and darkly humorous. Truthfully? I read almost the entire book in one sitting. I read a little bit the first night, and then picked it up again the following night and couldn't put it down. I felt sorry for Kammie and was mad at her at the same time. How could she be so stupid... to let the girls cut her hair? And then stand in a field and sing for the bratty, nasty girls, just to be part of their club? What was she thinking?

Then again, I'm looking at this through the eyes of a 48 year old woman, who isn't afraid to be who she is and who doesn't care if people don't like her the way she is (mostly anyway). It's hard to remember what it is like to be eleven. But... I feel like the author captured that feeling in this book. Kammie is eleven, and she just wants to be accepted. She doesn't want to be the outcast. She wants to be part of a group... to belong. And boy does it get her into trouble...

This book is nominated for a Sunshine State Young Readers Award for 2017-18 in the 6-8 grade category. I'm hoping I can find some girls who want to read it this year...