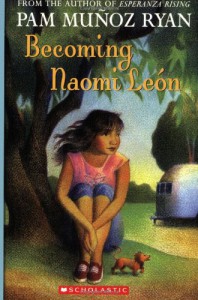 One of her favorite sayings was that the good and the bad of any situation were sometimes the same.

My thoughts dived into a jumble in the middle of my mind, wrestled around until they were wadded into a fisted knot, and attached themselves to my brain like a burr matted in a long-haired dog.

I always thought the biggest problem in my life was my name, Naomi Soledad Leon Outlaw, but little did I know that it was the least of my troubles, or that someday I would live up to it.

When Naomi was 4 and her brother was 1, their mother left them with their grandmother. Seven years later, the mother (Skyla) shows up on their doorstep wanting to "get to know her children". But, she has other motives. A chain of events sends Naomi, Owen, and Gram on a trip to Mexico where Naomi discovers more about her Mexican heritage and finds something unexpected.

This is a lovely story. The characters are likable. I enjoyed reading about Naomi's journey and how she reasoned things out in her head. Her devotion to her brother is admirable. She doesn't let anyone stop her when she needs something.

The book is culturally authentic and contains many examples of Spanish words and Mexican culture. Readers, especially girls, will enjoy reading about Naomi's determination and her adventures. The ending doesn't take the easy way out and is pretty realistic, as opposed to being too perfect and happy.