Secrets of Blood and Bone 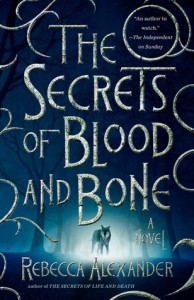 Following her showdown with Elizabeth Bathory, Jackdaw Hammond is running from her past, hiding from her future, and hoping to contain her newfound thirst for blood. Buying an overgrown home in the middle of nowhere seems like the perfect place to escape…at least until she finds herself in the sights of a murderous family with a terrible secret and a penchant for dark magic. Meanwhile, her old ally Felix Guichard has gone to New Orleans to conduct his own investigation into the nature of blood magic, but is soon sucked into the intrigues of the city’s occult underworld. But Jack will need Felix more than she knows, for the battle for her soul is set to begin.

Her only salvation may lie with the secrets of 16th century master occultist Edward Kelley, and a dangerous mission he undertook in Venice to confront the Inquisition, the darkest deeds of his own past, and the fearsome power of Elizabeth Bathory.

- from the back of the book

This book is the second in a series; my review for book 1, The Secrets of Life and Death can be found here http://readingismyescape.booklikes.com/post/1302848/post.

This book combines historical fiction with the supernatural. Before I read the first in the series, I had never read a book like this before. In order to follow the story, I had to really focus. The historical part was fascinating to me, a real serial killer (Elizabeth Bathory) is included in the story and made into something supernatural.

Jack is a flawed but likable character. Drinking Felix's blood has changed her, but even she isn't sure exactly how. The garden behind the house is a character in itself. It protects itself and the occupants and responds only to Sadie.

I really don't want to give the book away, so I won't add any more details.

For more information on the author:

For more information on the book:

Fans of urban fantasy mixed with historical fantasy. Whatever that means. :)