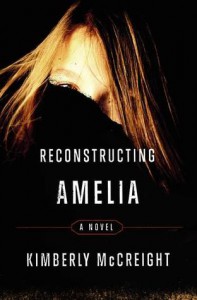 It isn't a spoiler to say that Amelia commits suicide in the beginning of this novel. At least according to Grace Hall, her exclusive private school. Her mom, Kate doesn't want to believe that her daughter committed suicide but the school and the detective on the case convince her that it's the truth.

Until... Kate gets a text that says "Amelia didn't jump." From there, Kate is motivated to find out the truth for sure. She digs through Amelia's electronic life to try to find out more information and is surprised to find out how little she knew about her daughter's life.

The story is told through Kate in the present and through Amelia in flashbacks from the days leading up to her death. From this and Facebook posts and various texts, we are able to piece together the truth about what happened to Amelia.

"...being a parent is awful ninety-five percent of the time... As far as I can tell, it's that last five percent that keeps the human race from dying out. Four parts blinding terror, one part perfection. It's like mainlining heroin. One taste of life on that edge and you're hooked."

"...some things you can't outrun, no matter how fast you move your legs."

"Sometimes it's hard to tell how fast the current's moving until you're headed over a waterfall."

Okay, so I really liked this book. I liked trying to figure out the mystery of how Amelia died and who was sending the texts. I liked the way the story was told from both Amelia's point of view (in flashbacks) and her mom's (in the present). I get why Amelia's mom was so down on herself about not knowing the details of her daughter's life. But, none of us know more than our daughters (or sons) tell us really. Even if we monitor all their electronic activity, there will still be things we don't know. I wanted to tell Kate that, to reassure her that it wasn't her fault.

I thought this novel would make me very emotional, but most of it didn't. At the end, I found myself feeling sad, but during most of the book I was so caught up in the details, that I kind of forgot about the sadness of what happened. So hard to do now that I have a teenage girl. It is way too easy to imagine how I would feel in such a situation.

This book is for adults. I think anyone who likes mysteries or books about teenage issues would enjoy it.

Thirteen Reasons Why by Jay Asher