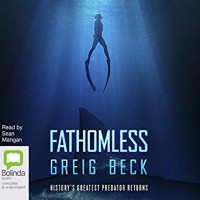 CARCHARODON MEGALODON
The largest and most fearsome predator to have ever existed on our planet. Rumors of its existence in our modern oceans have persisted for centuries. Now, in a new adventure, the rumors explode into brutal and terrifying reality.

I enjoyed this one. Cate and her fellow scientists, along with a Russian billionaire, and two crew explore an undiscovered cave, hoping to find a new species. They are underground in a small submarine and are attacked by a giant shark - Carcharodon megalodon. Believe it or not, after that, things get worse. Will they manage to escape the underground nightmare, and is the Carcharodon megalodon truly contained in that cave?

It took nearly 50% of the book for the action to get started, but once it did, I couldn't stop listening. The claustrophobic feeling of the sub is magnified by the atmosphere of the underground cave and the fact that we know there is a traitor on board. And what's not to love about a giant killer shark. :)

A couple of things bothered me about this book. First, the author used the word "leant" and people seemed to be leaning a lot. Second, we saw through the shark's pov, but only for a short time in the middle of the book, and then never again. Lastly, I was bothered that this giant shark that could easily eat half a whale with one bite would ever bother eating humans. It seems as if a person would be like a crumb compared with the whale. Why would a shark that size chase and eat a bunch of people, when it could easily kill something larger and be satisfied for a week or more?

Anyway, a fun giant killer shark story. Now I have to get around to reading Meg.